Moving Towards a World Free of Modern Slavery: An Interview With Activist Ishaan Shah

At Versed AI, we are committed to the eradication of modern slavery, and work to uncover modern slavery risk across the supply chain through our proprietary AI technology, which exposes data in supply chains at the multi-tier level.

We spoke to Ishaan Shah, who at only 18 years old, is the Founder of Stolen Dreams - an organisation, working internationally with governments, institutions, civil society and youth to drive action around ending contemporary forms of modern slavery. He is also a UK National Youth Representative at UN Women and UNCTAD.

We discussed why exposing modern slavery in the supply chain is paramount, and why businesses need more transparency in their corporate practise.

Hi Ishaan, it’s great to chat with you. It’s remarkable that at only 18 years old,  you’ve achieved so much already. What got you interested in the issue of modern slavery this early on in your life?

I first learned that modern slavery still existed in 2016 when I was thirteen years old. I was shocked. I was unaware that exploitation still existed today and closer than we think. Modern slavery is not an issue only happening in faraway countries and communities, we are encountering it every day in the clothes we wear, foods we eat, and even on our high streets.

As a curious teenager, I went onto the internet to research the issue further. I distinctly remember reading the stories of child survivors of modern slavery; about how these children, who were the same age as me, were forced into a life of exploitation. And these stories were a handful of millions more. I also found that the information about this issue was complex, harrowing and challenging to digest. It became evident that young people were not aware that modern slavery still existed and that the movement was not inclusive of youth.

Coincidentally, around the same time I learnt that modern slavery existed, my school told our year group that we would be undertaking an independent research project over a period of six months. We were given the freedom to choose any topic and present it in any medium. Contextualising and recognising my privilege and the resources I had, I knew that this was an opportunity for me to create something with a lasting impact; so, Stolen Dreams was founded.

It was a combination of these experiences in late 2016 that led me to develop the interest and determination to combat this issue.

You speak of a need for systemic change, addressing the root causes that enable exploitation. What are these root causes, and where can we begin to make a change?

These links to history are important because they allow us to visualise the root causes of modern slavery. Poverty, climate change, gender inequality, lack of access to quality education, conflict, and war – these are a handful of the root causes enabling exploitation. Why? Because each of these issues exacerbates vulnerabilities to exploitation.

Thus, to effectively combat contemporary forms of slavery and trafficking in persons, we need systemic change – we must address the root causes enabling exploitation in the first place. This begins with working at the grassroots level (through a multi-stakeholder approach) in high-risk communities. Of course, this is where we truly need the political and corporate will (legislation, funding, resourcing etc) to take bold, transformative, and concrete action.

This is a great question, because to see substantial progress, the corporate will to act must be there. The economic system today in the corporate world has been built to prioritise profits before people and the planet. This means that modern slavery, and in particular, forced labour and debt bondage labour are common in supply chains.

At any point in the supply chain of a product, there is a risk of slavery being used. This means that the clothes we wear, foods we eat, the technology we use – the goods and services we consume on a day-to-day basis could have been produced using forms of modern slavery.

With greater demand, businesses are always looking for cheaper sources of labour. There are over 16 million people exploited in the private sector, linked to the supply chains of the international businesses supplying our goods and services.

Approximately 60% of forced labour is associated with manufacturing supply chains. Additionally, supply chains are often extensive and complex. This means that it is difficult for a business to oversee who is working where and under what conditions. Moreover, the globalisation of supply chains has added to the challenging nature of ensuring that suppliers are enforcing the same measures.

The agricultural, fast fashion and technology industries are at the highest risk of using forms of slavery in their supply chains. According to the International Labour Organisation, agriculture, fishery, and forestry are the sectors with the fourth-highest proportion of victims of forced labour worldwide.

Victims in the agricultural sector in Europe are often lured by the false promise of a job by traffickers. Many agricultural “workers” are enslaved through debt bondage (a form of slavery) to repay debts. The cocoa industry alone has over 2.1 million children working in their supply chains!

In the coffee industry, children as young as six work ten hours a day and are exposed to many health and safety hazards. The coffee harvesting process involves dangers from high levels of sun exposure and injuries to poisoning from contact with agrochemicals.

Forced labour is present in the fashion industry, from child cotton pickers in Uzbekistan, held in debt bondage by their employers to those who are coerced into factory labour in India and Bangladesh. Victims are forced to live a life of fear and violence, exploited to work hours on end to meet the demands of corporate consumerism.

G20 countries imported $127 billion in fashion garments identified as at-risk products of modern slavery (2019). Fast fashion brands including H&M, Primark, Zara, T.J. Max and Nike all profit off of the exploitation of people.

There is a risk of forced labour in the electronics industry too in China, Thailand, Malaysia, DR Congo, the Philippines, and Indonesia. Electronic brands such as Apple, Samsung and Microsoft have been found to engage in supply chain slavery.

Risks are often associated with migrant workers who may incur large debts in their pursuit of employment and may face debt bondage. They can be stripped of passports and work documents or held in a place of employment against their will. Children are forced to mine cobalt for use in the latest mobile phone and people in factories are forced to assemble electronics. 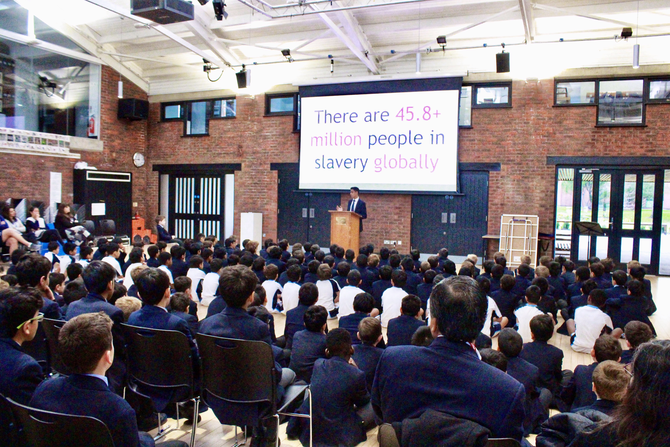 What measures can companies implement to address and expose the risk of modern slavery in their supply chain?

New technologies can assist companies to follow ethical practices in their supply chain, with solutions to this problem including the use of artificial intelligence, such as Versed AI. Moving forward, businesses must take action to audit their supply chains and be transparent about these processes too. Yes, the Modern Slavery Act 2015 requires companies (turning over £36 million in sales) to publish a statement, but this is by no means enough. In fact, under current legislation, businesses only have to publish a statement, but do not have to take action and there is no accountability.

This must be paired with the political will to act too. Governments must introduce import controls on goods produced using forced labour. This should increase supply chain transparency, and will ensure that companies are held accountable, enforce appropriate sanctions, and produce zero-tolerance policies to forced labour.

All these measures to tackle forced labour need to be secured in trade agreements, legislative and development frameworks. To end the exploitation that exists in supply chains, a multi-stakeholder approach must be taken that always puts workers at the centre, putting people (and the planet) before profits.

What do you want to work towards in the future and the fight against modern slavery?

The priority is to engage more youth in the movement. This starts with awareness - providing accessible resources, recognising intersectionality - for example with the climate action movement - and providing tools to take tangible action.

What Stolen Dreams calls for is the meaningful inclusion of youth within the movement and subsequent decision-making spaces. This means ensuring that youth are co-creators, co-leaders, and co-owners of anti-modern slavery efforts. We also call for accountability and transparency measures and for our efforts to be adequately resourced and funded.

There is a long way to go to end modern slavery, but I strongly believe that involving more young people within the movement, and obtaining visibility across supply chains, will pave the way for greater progress.

Keep Up To Date With Versed AI's News